As I was planning my trip to Cotabato, I learned from wanderingcha of the homestay T’boli School of Living Traditions (SLT) in Purok Lambanig, Lake Sebu, South Cotabato. 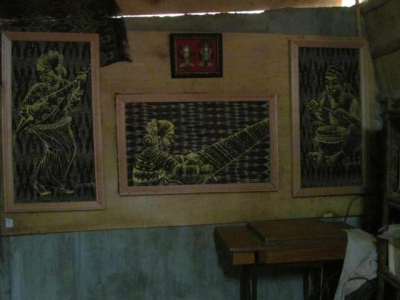 The only way to get there from Brgy. Awang in North Cotabato City is to take the Husky Bus bound to General Santos City and alight at Insulan van terminal where I could get a connecting ride to Surallah Integrated Public Terminal, the entry point to Lake Sebu.

At first, I was quite apprehensive because I will have to pass through Maguindanao and the dreaded Ampatuan kingdom. Nevertheless I took the 7AM first trip as advised by my guide: that ambush could happen anytime but it was more practical to travel in the morning than at night. 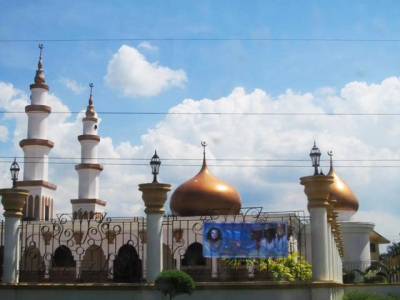 Mosque along the road to South Cotabato.

The trip to Insulan located in Sultan Kudarat was approximately three hours (PHP100 student fare). From the dusty window, one can appreciate the anthropological mosques in varied size and motif that abound as a testament of the Bangsamoro. However, military and “COMELEC checkpoint” was also a common gate in every town we passed by. 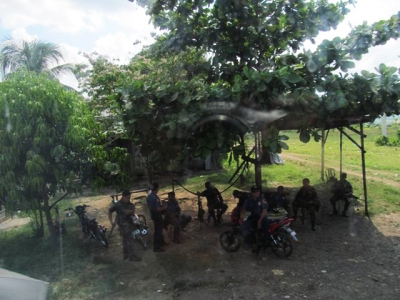 Paparazzi shot from bus window of lazy dogs / military checkpoint along the road to South Cotabato.

Is this some kind of dark comedy? I asked locals whether such checkpoint is good for the Moro people. They just laughed. Others were remain silent. One answered in rhetoric: “Ma’am, anong kaibahan ng kawatan sa palengke at ang politiko?” (Ma’am, what’s the difference between a street robber and a politician?) He said that the first one robs first then runs while the second one runs first then robs. Apparently, he referred to as the big time type of robber the political dynasties who dominate the region and who display authority with their private armies, majority of whom are agents of Philippine army. I am aware that there are many places in the Philippines wherein politicians of the same name and clans run the most basic government unit up to the highest office in the same province. Democracy based on guns, goon and gold is so 1960s. I just learned how worst the situation could be in this part of the country.

Shot of banana plantation along the road going to South Cotabato.

The panorama of vast land, mountains and forest is a source of such bureaucratic greed. Evidently, the region has many produce such as rice, corn, banana, pineapple, coconut and abaca. Moreover, it is rich in lumber, gold and other minerals. I thought about the coming May election and how Filipinos will have to suffer another round of elite circus. A sign of hope and social change for ordinary people in the region is the existence of Bayan Muna Partylist posters as well as of MAKABAYAN senatoriable Teddy Casiño. 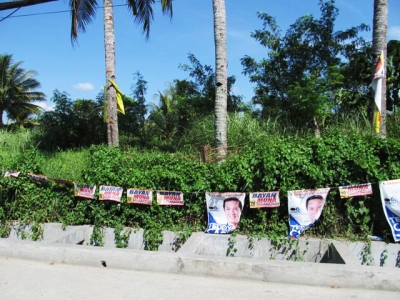 From Insulan, Surallah is only one hour (PHP40) but you would have to wait until the van gets full load which means 21 passengers in a ten-seater van. With this car stuffing system, one local said that is why it is better to take the bus than a van here in Cotabato. Besides, another would say, a van is more vulnerable to ambush. Residents here are just consistent in being vocal with warnings for the good of tourists. Well, expect a little back pain and knee pain in this ride and cross your fingers for a smooth safe ride. My ultimate complain was not being able to get photos along the road because my hands could not move.

Rice Field along the road to South Cotabato.

From Surallah, I took a thirty-minute jeepney ride going to Lake Sebu (PHP36). If you want to take a full sight of the landscape especially of the Allah River, don’t fret with the sun’s heat and avail the topload. I think a woman taking the topload is not as accepted as in the Cordilleras. 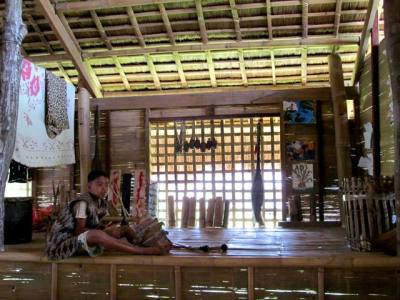 Alas, I made it to the humble abode and school of Auntie Maria Todi (+63912.9764041) where she teaches kids traditional music, dance and chanting/oral narration. The teacher was out though. Her sister-in-law Auntie Tisay Todi told me Auntie Maria is in Manila at present for a month’s program. Normally, the school is open on Saturdays so I could have observed. Nevertheless, the kids who were practicing when I arrived dressed up and demonstrated their dances: Madal Taho (Dance of a Good Person), Madal Ahalos (this sounds Vedic and familiar in Indian Theater but the kids could not translate), Madal Iwas (the quite popular Monkey Dance; natives regard monkeys as ancestors) and Madal Tahao (Dance of Bird). The kids also sang Lam ‘Unay (sa sulod / inside).

There are many indigenous tribes in the country who are able to take strong hold of culture despite more than 300 years of Spanish occupation, 4 years of American/Brittish/Dutch and two years of Japan. I don’t understand their own indigenous language but music, song and dance just automatically connected us. Auntie Tisay told me there is also another T’boli SLT up north but volunteers were out so it was closed.

A Family in Zipline shot from Falls 2 at Lake Sebu, South Cotabato.

As I still had time to go around, I decided to negotiate again for a single motorbike pakyaw ride. As in Cotabato City, drivers don’t have a standard price here but I think PHP400 half day was fair with a fourth of it consumed by gas. I told my Kuya driver and guide to suggest to the community to have a basic price so they will not be abused by tourists and vice-versa. 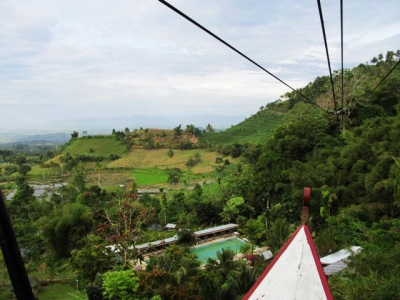 I first trekked Hikong Nature Park (PHP10 entrance for students) to see the famous seven waterfalls that provide life to Lake Sebu and the Tiboli tribe as well as settlers from different regions and countries, primarily Ilonggo, Cebuano, Maguindanaons and foreigners who inter-married. You can trek around to see the falls or take the zipline which claims as the highest and longest in the country. Alone, I was chickened-out by the zipline so I just trekked Falls 1 and Falls 2 then took the old sky cable boat ride at Merl Garden Spring Resort (PHP75) whose first zipline was displaced by the new 600-feet high zipline. Eventually, as we parked in the end line of the cable boat, a beehive in the tree house was disturbed.

In Falls 1 named Dongon Falls or Hikong Alu (Passage Falls), I had a photo taken in traditional T’boli dress (PHP50 rent) to internalize the role of a goddess and guardian of nature. Falls 2 known in T’boli as Hikong Bente (Immeasurable Falls) is the grandest of seven falls. A rainbow welcomed me along with the music of gushing water.

I then visited Punta Isla for a snack. I pity T’boli children, men and women who were rather tired in their day’s work of speaking English and performing for visitors. I could not take it. While the view of lake and islets was mesmerizing, there was a revolution of sorts inside me for my fellow Filipinos merely regarded as entertainers.

I went ahead to shop for pasalubong at the T’Boli Trade and Crafts Gono Kem Bo-I (Princess House) managed by the Cooperative of Women in Health and Development (COWHEAD) with investment from Japan.

The T’nalak fabric ranges from PHP200-1,000 a meter depending on the design. Weavers said it is really expensive because abaca used in the T’nalak would take 20 years to dry. Traditional T’Boli dress, hegalong T’boli guitar and decorated knife range from PHP800-1,000+. I WANT something for home and cultural organizations in Manila but the budget is not enough that I opted for beads and tubaw (PHP25-35) for friends. I wanted to see the women’s weaving shop in nearby hut but I was told it was not possible at the moment. 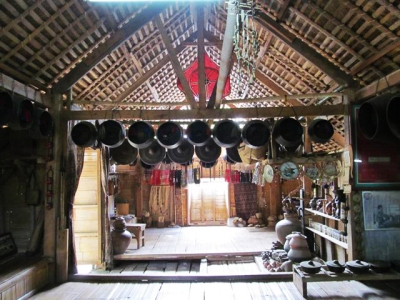 Next stop was the Baay Family’s House of Gongs (PHP10 entrance with camera). Also called T’boli Museum, it is a hut filled with relic musical instruments, agricultural simple machines, T’nalak fabric, dresses and accessories. Nanay Alice who opened the house told me some items are 17th century old. On display too were paintings by in T’nalak canvas and clips about NCCA Gawad Manlilikha ng Bayan Lang Dulay (1998 National Living Treasure Awardee) as well as about Bundos and the tedious brass casting. 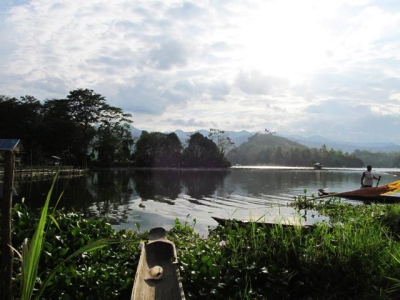 When the sun was down, I went for a refreshing actual boat ride and fed fish in the lake pond. The boat was owned by my guide’s Uncle and he said not to mind the rent. I was touched with this warm hospitality as I thought I would not be able to experience the lake because the commercial rate PHP500 for motorboat rent is just too costly for me. I wanted to wait for sunset at the lake but Kuya guide suggested we join the 15th T’boli Seslong Festival thirty minutes away. I thought it was too far and that it would be too late already but then out of curiosity I agreed. Kuya succeeded with his PR-pro that the fest is highly swarmed by prominent actors and tourists.

In essence, “seslong” refers to sisterhood but I did not see any of its core in the event. Well, at least at the specific time when we were there. I rather expected a cultural solidarity happening. I almost laughed to have travelled far only to see a carnival, gambling and sports olympics in Brgy. T’boli in its 39th Foundation Day sponsored by mayors and governors.

Indeed, there is a Brgy. T’boli and found it rather awkward thinking that this is a type of pocket awarding of land title. This is the part of T’boli community wherein you cannot recognize a migrant settler from indigenous people lifestyle-wise if not for the language. Knowing of large-scale mining in this area, it is not surprising to observe cultural decay.#