From Caloocan, Dalandanan in Tungkong Mangga, San Jose del Monte, Bulacan lies just in the border of Metro Manila and Central Luzon yet the area has no electricity. This is embarrassing for a national government performance in basic services. Hello, Mr. President? Hello, Mayor? When will you recognize 60 families in this area exist? They have been here for decades and have even developed the land for cropping, orchard, coconut and rice.

Face to Face with Landgrabbers

More than 100 hectares of land is a subject of dispute between the 60 families of farmers and the Araneta family, the same Araneta bloodline of Gateway, Araneta Coliseum, Araneta Quezon City Avenue and the whole of Cubao commercial complex. Every now and then in the farmers’ lives, Araneta pesky agents and private armies would harass farmers to shoo them away.

In April 2008, 16 families received a ‘Notice of Demolition’, a “court order” according to Araneta private guards. Consequent investigation by Anakpawis Partylist revealed there was no court order at all but a landgrabbing motive of instigating fear among the families. Farmers signed a blank paper that later declared their ‘agreement to self-demolish their house in 15 days time’ and receive P20,000 cash for doing so plus a 32 square meter house from pseudo housing entity Gawad Kalinga. It was a clear sample of deception whereas farmers of Dalandanan are supposedly beneficiaries of land distribution under CARP since the 80s. Sadly, five hectares of land have been illegally converted while 100 residents were dislocated. For those who destroyed their own homes, only P3,000 cash was distributed to the families in reality. In the same period, a father of three children was shot by private guard Antonio Palle one day when he was drunk. Normally, Araneta private guards stay in the houses of locals to harass them.

The community started organizing themselves by studying their land, rights to till the land and reap its harvests. The Samahang Magsasaka sa Dalandanan as a local chapter of Anakpawis was established in 2009. Since then, the organization has lobbied for the farmer’s Notice of Coverage from the Department of Agriculture. It has also conducted trainings in land problem solving, organic farming, sustainable farming and systematic trading of produce. Most importantly, the village resolved to assert their rights to the land of their birth and home of their ancestors’ grave.

In 2010, another case of private guard abuse was experienced by a family of thirteen. Ten armed men from Gregorio Araneta’s Clubhouse demolished a family and ransacked their fishpond, fruits and other produce. The association filed a case against them.

Meanwhile, in 2012, another pocket demolition of 12 families was attempted by the Aranetas specifically headed by Robert Cing, an Araneta cousin. Agents illegally cut mango trees to convert the land to ‘bamboo plantation’. This time, farmers squarely stood in their bare feet and did not opt for self-demolition.

The association also continuously protests the construction of MRT 7 in their farm. Their demand to the government is to take its original plan in 2008 which was proposed to the village wherein no agricultural land will be affected in the construction. 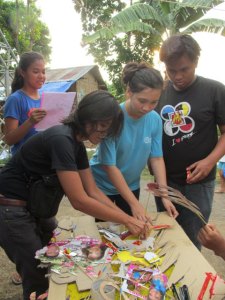 This is the bayanihan way of farmers in this village because naturally, they have a vast land to till with just small hands. It was a great relief for them when in 2011, the organization received their first communal carabao baptized by the people as “Paeng” after AnakpawisPartylist Rep.Rafael “Ka Paeng” Mariano. They also got seedlings and farm tools for communal use, all awarded by Anakpawis, a proponent of Genuine Agrarian Reform Bill (GARB) or House Bill 3059 that enacts real land distribution and agricultural subsidy for farmers.

An addendum to the meaning of batarisan is the farmers’ unity march from the province to Mendiola every October Peasant Month and every January tribute to the martyrs of Mendiola Massacre.

Art to Diminish the Landgrabbers

After farming and hearing the narratives of leaders and families about their daily and protracted fights, around 15 children and youth participated in improvised percussion workshop, shadow play and theater improvisation.

The music workshop was an exploration of beats from materials readily available in the area. Participants plotted the rhythm of chaos, upbeat, serene, fast and furious. The shadow play was a sketch of a farmer-daughter who tried their luck in Manila after falling in the pit of debt due to high cost of agricultural inputs as well as devastation by natural and man-made typhoons. Eventually, they found hope in being organized and empowered by political literacy and politics of change introduced by Anakpawis. 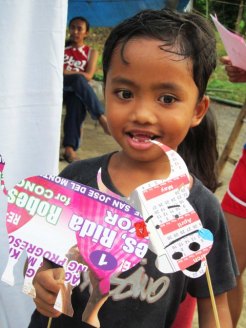 The theater group mounted two sketches. One was the tragic killing of a farmer by private guard and the demolition chronicles experienced by families under Araneta landlordism. The second was a comic sketch with an element of comedy of error wherein the whole community of farmers plotted to shoo away the abusive Donya Ara and Donya Neta from their hacienda by creating a houseful of ghosts. In the end, the two donyas were forced to sleep in the small huts of farmers with only the moon as light, the river as drinking water and mosquitos as their sleeping partners.

On the other hand, farmers enjoy the the Donyas’ castle with electric appliances, happily use Downy in washing their plates and take milk for bathe. Most importantly, they eat the best rice that they planted as well as the meatiest chicken from their poultry care.#

Lakbay Sining is a Roving Art Camp. In its pilot year in 2010, participants immersed with the fishing and farmer folks of Talim Island in Binangonan, Rizal. One of its components was a Voter’s Education for the 2010 Philippine Election. In 2011, the next site was in Hacienda Luisita, Tarlac and benefited peasant youth of Hacienda Luisita and the campaign of farmworkers for land distribution. Last year, Lakbay Sining was held in the fishing and farming community of Calatagan, Batangas.